How To Convert Birdie Putts

Birdie putts are makable putts inside of 25 feet. If you're farther away than that lag putting should be your thought. You're trying to get down in two outside of 25 feet. Once in a while they go in, but that is a bonus when it happens. This article focuses on the putts that you want to give a run for birdie; putts inside of 25 feet that don't break more than a foot or two. Anything with more break than that is a lag that you're trying to get close and hoping it falls in.

Makable putts present their own challenges. The challenge is to give the putt a chance to go in while minimizing the risk of three putting. Different putts require different approaches to speed and line. The key is finding a balance between the two. Here's how to do it.

Speed determines line. If you hit two putts from the same spot at different speeds they will break a different amount. When you are reading a makable putt, decide your speed first. If you've got a ten footer straight up hill, you are probably going to hit it firmly which will require you to play less break. A downhill ten footer, on the other hand, will be hit much more softly and will break significantly more because the ball will be rolling slower and have more time to be affected by the surrounding slopes. Always choose your speed before you choose your line.

When you're picturing a makable putt, realize that it is going to break more as it slows down. It travels straight for the first part and usually breaks more at the end when it is losing speed. There are exceptions but this is a general truth. Pay special attention to the part of your putt when your ball is going to start taking the break. This is the apex. The majority of your time should be spent picturing the putt from the apex of the break into the hole.

Look At the Clock

The center of the hole changes on every putt. If you don't adjust your mental picture properly, putting well is impossible. Imagine you have a six foot putt with no break. Now imagine the hole is a clock with the 12 hand at the top and 6 hand at the bottom. To make this putt, the center of the hole is at 6 o'clock. Now take a 6 foot putt with two inches of break from right to left. To make this putt, the ball must start towards the right edge of the hole and curve left towards it. It will enter the hole from the right, around 5 o'clock. Figure out where on the clock you want the ball to enter the hole.

What Time is It?

Taking The Break Out 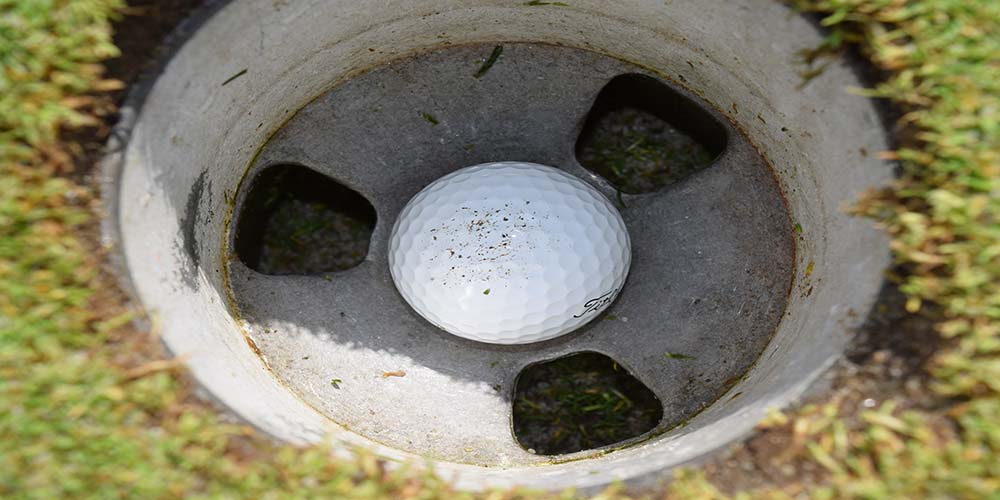 This drill will help get you away from mechanics and into picturing your putts with the intention of making them. It will allow you to hone your instincts on the course so you'll know how to give your putts a good chance without getting carried away. Drop three golf balls on your practice green. Putt each ball to the hole at different speeds. On your first putt, try to play as little break as possible and hit it firmly. On your second putt, play the most break you can see and try to get the ball to enter the hole with its very last revolution. On your third putt, try to split the difference and play a medium amount of break and hit it at a pace that will go a foot or two past the hole. When you get to the course your instincts will be much better because the picture in your head will be clearer.