Playing From All Types of Sand 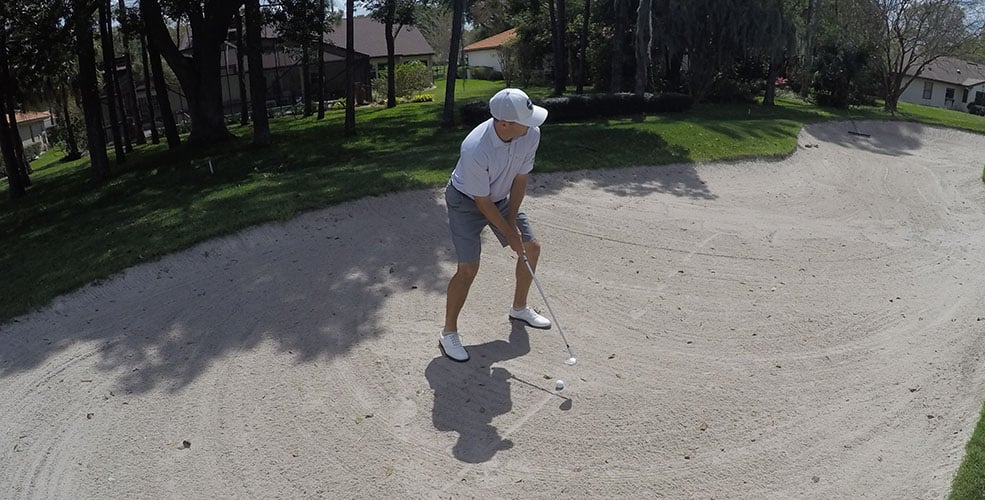 Bunkers can vary dramatically from course to course. If a player uses the exact same setup for a bunker shot out of extremely fluffy sand as they do out of compact sand, they will experience wildly different results. The simple reality is that your golf club will react differently when impacting surfaces with different levels of firmness. Firmness can vary with the amount of sand in the bunker, the type of sand, and how wet or dry that sand is. You can determine the consistency of sand in a bunker by simply walking into it. Even if you haven't played much golf in your life, you've probably walked on a beach somewhere and noticed that the sand near the shoreline is much firmer and compact than the sand that never gets touched by water. Walking into a bunker is no different. Sometimes your feet immediately sink inches into the sand and it's more difficult to move. Other times your feet barely dig beneath the surface at all and you can walk normally. Your feet react differently when impacting different sands and you can rest assured your golf club will too. Use your feet to dig into the sand to help determine how much sand is under your ball.

Playing shots out of bunkers is always described in the same way. The reality is that the basic bunker technique is merely a framework that you must make adjustments to in order to increase your probability of success in all types of sand. Below are all the variations you may encounter during your next round.

** The only way to know exactly how this will affect you is to practice but use these tips as a framework for improvement. 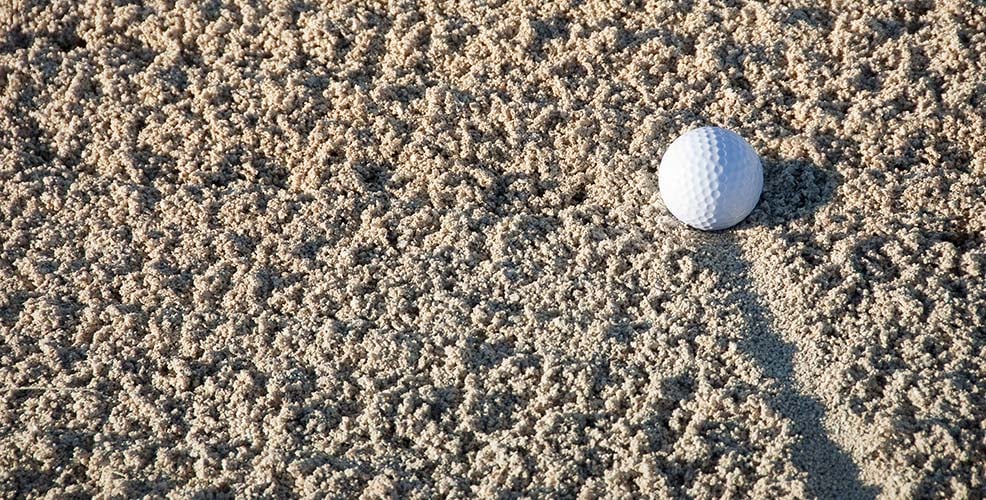 Normal sand is light brown and non-descript. Your feet sink about an inch below the surface when you step into the bunker. This is the type of sand that the basic bunker technique should be used for. Slight adjustments are required when there is more or less sand in the bunker but all of those variatons are covered in our article on basic bunker technique. 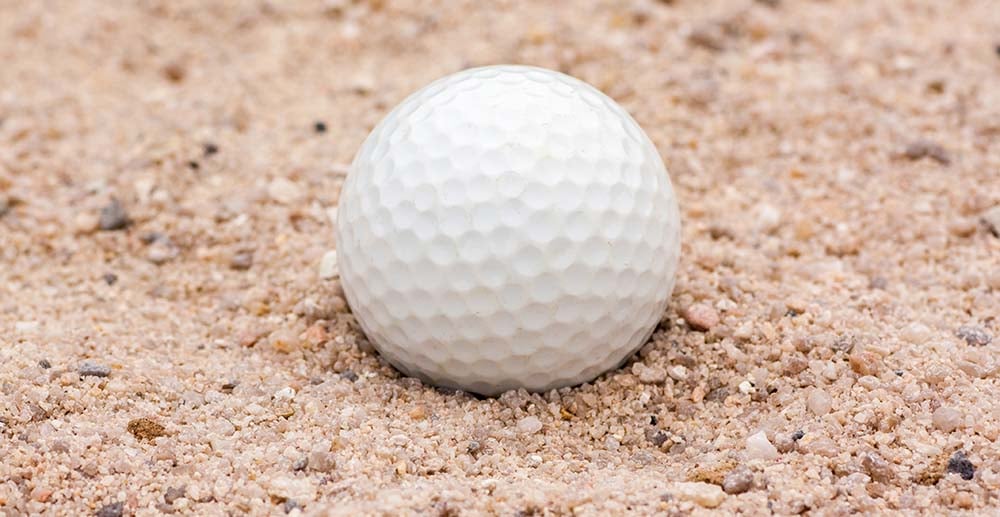 When you encounter a bunker with noticeably large pebbles of sand, you should immediately understand that the ball will not spin very much. These large pebbles get in between your clubface and the golf ball and ruin any friction you may be able to create in finer sand. If there is a whole bunch of sand in the bunker and it's pebbly, that's even worse. Once again, the ball will not spin!

If you're playing to a pin with very little green to work with, the only way you can get the ball to land softly and stop quickly is through trajectory. In short, you need to hit it higher.

Longer shots are less challenging from pebbly sand because you don't have to worry about the ball spinning unexpectedly and coming up short. The lack of friction in pebbly sand is working in your favor. 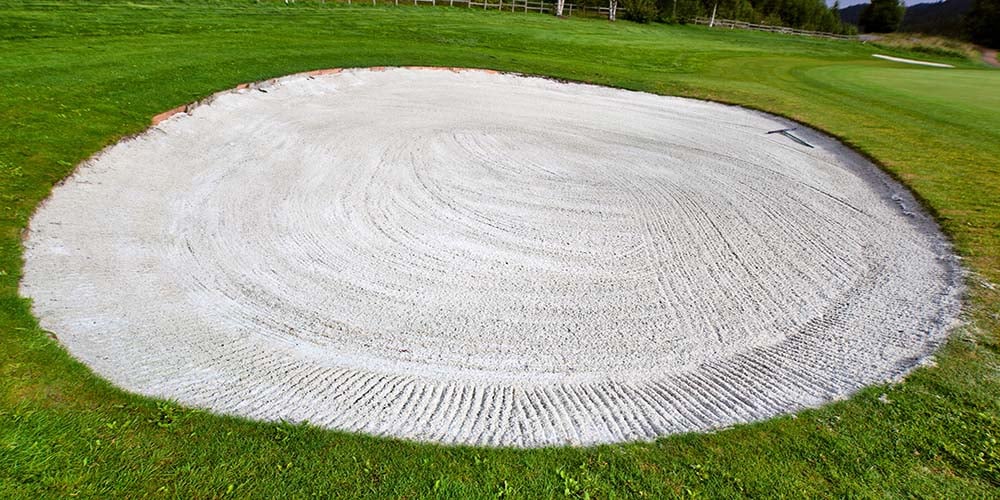 At many of the more fancy country clubs, crushed marble is used in the bunkers. It has some notable attributes that a player can notice right away. Crushed marble is much whiter than other sands. Sometimes it's so bright in these types of bunkers that it can be blinding on an extremely sunny day. Also, crushed marble tends to be much more compact than other types of sand. When you dig your feet in, you will notice that they don't go down into the sand very far at all. Playing shots out of this type of sand is relatively easy compared with other types but there are a few things to keep in mind. You need the club to dig into the sand in order to get underneath the golf ball. The more you open the clubface, the less the club will dig into the sand.

Playing to short pins with no green to work with from crushed marble requires the same technique described in the basic flop shot. Keep these keys in mind as points of emphasis.

Shots with a lot of green to work with are a little different out of crushed marble. It is tough to take the spin off of the ball out of this type of sand. You need to anticipate the spin. If you picture a ball running after it lands you will come up short almost every time. When this shot is executed properly, it will come out at a medium trajectory, take one bounce, then check.

Beach sand literally looks like it belongs at the beach or a playground sandbox. It is extremely deep and thick. Your feet feel heavy and sink so far into it that you nearly get sand inside your shoes. The heaviness of this sand requires maximum swing speed. Your club will dig into this sand as easily as your feet do. Striking down at the ball will only increase this effect. All of the concepts described in the pebbly sand section above also apply to beach sand. 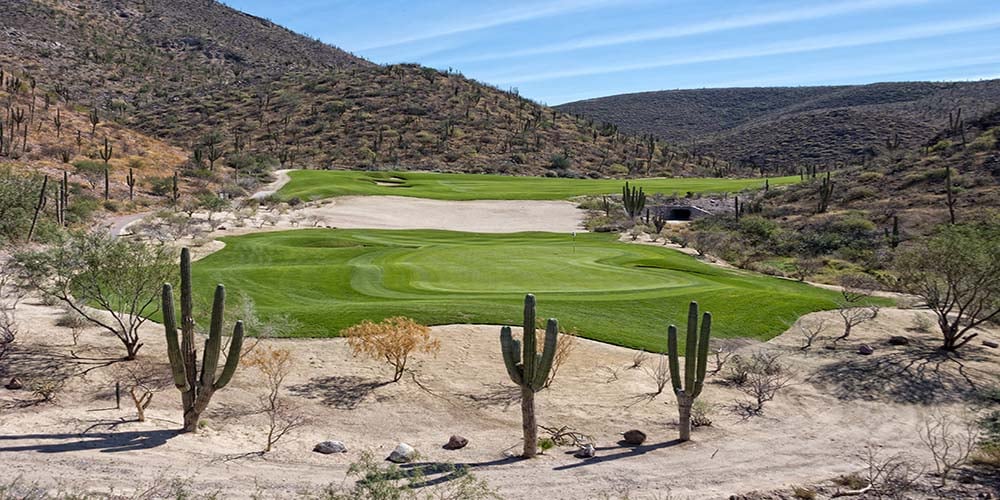 If you're playing a desert golf course and your ball wanders off the green, it can roll into dry firm desert sand. This is nothing like playing from normal sand. The ground is like concrete and the sand has large pebbles in it. Shot selection is extremely limited in this situation. Throw your basic bunker technique out the window and follow these keys to get the ball out of this mess.