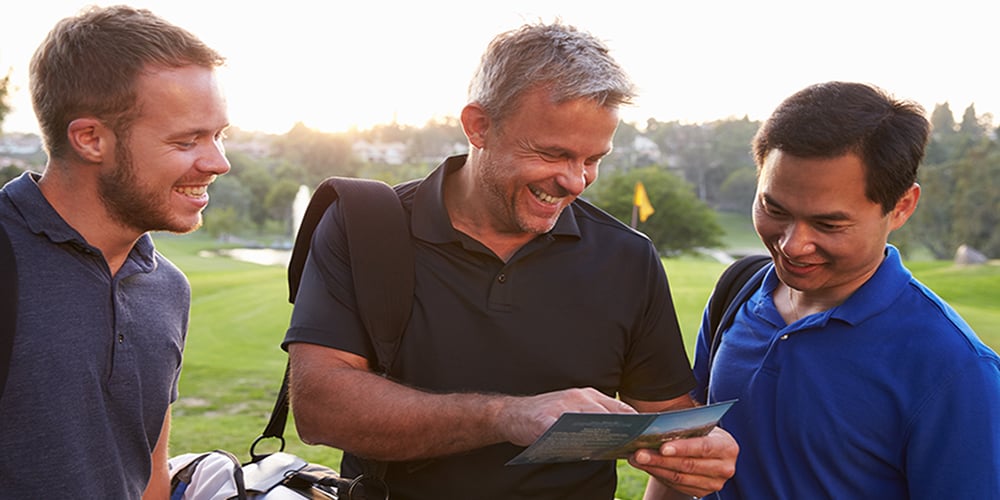 It is important to take an accounting of the state of your game. Everybody's game fluctuates round to round but give yourself an overall grade in the following areas:

If you're looking for more than just a guesstimation of your feel about your game, keep stats for yourself. It is helpful to keep stats on total putts, greens in regulation, fairways in regulation, sand saves, and up and downs. After about ten rounds you should see a general pattern in where you are saving or losing shots. By evaluating the areas of your game and deciding which areas have the greatest room for improvement you will be able to develop an action plan. Click here for a great statsheet to use when you really become dedicated. If you keep your stats this way, you will be able to compare your stats to the best players in the world.

Focus on the Numbers

We provide these stats not to bore you into submission but to prove a broader point. 87% of your shots are with a putter, driver or wedge! This is where you should spend most of your practice time. Too many of us spend time trying to perfect our 5 iron when it only accounts for 1%-2% of our overall shots. In order to shoot lower you must practice the things that have the largest impact on your score. Once again, driving, wedges, and putting. After your self evaluation and knowing these percentages, you can figure out which of these areas you should devote the most time to.

How many times have you had a career low 9 holes on the front nine only to blow up on the back nine? Or, just the opposite, play horrible on the front 9 and all of sudden find your game on the back nine and come in around your normal score. This has to do with your golf comfort level or â€œcomfort zoneâ€.

We all have a golf inner thermometer that tells us where we stand. If we get too far away from our comfort zone in one direction or the other our brains have a way of bringing us back to a comfortable range. For example, if your average score is 85 and you are even par after 8 holes, chances are that is when a big score is coming or a string of bogeys. The idea is to increase your comfort level shooting low scores by doing a couple of things differently when you practice.

Thinking about the future is fairly taboo in the mental golf world. Virtually every expert on the mental game will instruct players to stay in the present moment at all times. They encourage being in the moment as a key factor for success. While this is very important and should be used as a guideline, it is just about impossible to be in the present all of the time. We're all human. All of our minds wander on the course from time to time. If you're spending your energy trying to stop yourself from doing this you are probably going to end up chasing your tail. Instead, take this opportunity to direct your thoughts toward positive outcomes. Leave the past in the past. Evaluate your current position and set new positive goals.

When you get off to a poor start in a round, the law of averages says that things are probably going to even out in the future and you're going to play better and return to your average. Conversely, when you get off to a great start, the law of averages says that a bad stretch is probably in your future and going to return you to normal. In order to shoot lower scores, you must mentally develop a double standard. You must believe that a bad start means that you are bound to play well in the future. You also must believe that a good start simply means that "today is your day" and nothing can stop you. When the law of averages is working in your favor you need to believe in it. When it isn't, you need to forget about it and convince yourself that the golf God's are smiling down upon you. Always believe that whatever situation you are in is going to lead to good play in the future.

Here is a personal story from our very own staff contributor and former Web.com Tour member Mike Lavery.

Early in my career, I struggled to shoot really low scores. When I was 18 years old, I had never shot below 68 even though I had many opportunities. I was always able to play well coming down the stretch to save a mediocre round but I couldn't seem to do it when I really had it going. I asked people who had shot really low numbers (65 or below) how they were mentally able to do it and I could never quite get a straight answer. I read many books about the mental game and those books always advised to "stay in the present". I tried that for a long time but it was extremely difficult for me.

At the time in my career, my comfort zone was anywhere between 2 under and 2 over par. If I was playing poorly and I was 4 over par standing on the 15th tee box, I would think about the upcoming holes and decide which ones I thought I could take advantage of and set a target score that I thought was realistic. Often times, I would birdie a few holes coming in and reach my goal, salvaging the round. But then, conversely, if I was playing well and I was 3 under par on the 15th tee I would try not to think about it. I would spend my time focusing on trying to be in the present or not thinking about the future of my good round. I didn't want to think about anything bad that could happen so I tried not to think about anything at all. The feeling was like I had my hands gripped tightly around the steering wheel of a car and didn't want to let go. But hanging on to the steering wheel hardly ever worked. I would almost always give back strokes coming down the stretch and turn what could have been a great round into something unremarkable.

Then the obvious occurred to me one day and I started employing the strategy of forecasting a positive future during every round, no matter what. I would do a mid-round evaluation when my mind started to wander and set a realistic and positive goal for the rest of the day. If I was three under, I would pick out the holes that I could attack and set a target to reach. So in my head I would already be 6 or 7 under in the future. With this new expectation, facing the reality of being 4 or 5 under became undaunting. When I shot my first really low round of 63, I had already seen it happen in my head dozens of times. I had 63 written on pieces of paper and posted all over my house; on the bathroom mirror, above my bed, and I even had a scorecard from my home course filled out with 63 on it. I had seen the holes I was going to birdie and how I was going to birdie them. Shortly after I started doing this I got it going one day. I shot 31 on the front nine and my mind started to wander as usual. But this time I was ready. Instead of trying to stop my mind from wandering I directed my focus and set a goal at the turn to shoot 32 on the back by birding the 2 par fives and the 2 easy par 4s. I didn't birdie the holes I thought I was going to birdie but I shot 32 nonetheless. It was the most magical thing I had ever experienced.

Use Mike's strategy to set your own goals both before and during your next round and you'll soon experience this magic as well. It will inspire you to reach new levels in your game. You will not always reach your goals but the effort alone will improve your scores overnight.